There have been red flags raised over the plummeting cedi value and its effect on businesses since the beginning of this year, 2022.

However, a former Chairman of the ruling New Patriotic Party, Odeneho Kwaku Appiah is of the view that the currency fluctuations are a natural outcome of floating exchange rates, which is the norm for most major economies.

In an interview with Joel of Oyerepa Breakfast show on Monday, October 24, COKA admits that times are hard but blamed it partly on speculations being made by Ghanaians in recent times. He says the louder the speculations, the more the forex market responds negatively. “I think it’s high time we as a people tone down on unnecessary speculations. Government admits times are hard, and it’s not only in Ghana. It’s a global phenomenon. Not a single country across the world is spared. So let’s tone down a bit. We’re not doing our economy any good by speculating. The panic reaction to the exchange rate is as a result of our usual ‘noise making’ which in the long run will do us no good.”

Sounding hopeful, he added that a country’s economic performance could influence the exchange rate, regardless, there’s hope.”I want to assure Ghanaians that all is not lost. Just as there’s a rise, there could be a fall in the exchange rate. But for now, let us tone down. It’s a sure way to get our economy back in shape, he stressed. 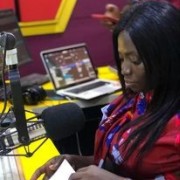 Nana Yaa is a journalist with a demonstrated history of working in the broadcast media industry. Skilled in editing, social media marketing, web content creation, News writing, and Fixing. She is a communication professional with background focus on Public Relations and Marketing.